Atheism and the Alt-Right: A Horrible Confluence

The atheist community is often assumed be liberal. But in the past decades, prominent atheist and self-styled “pro-science” writers like Sam Harris, Richard Dawkins, and the late Christopher Hitchens have embraced views on race, gender, and Islam promulgated by the two overlapping wings of the alt-right, the misogynist “men’s rights movement” and white nationalism. And the alt-right has made a concerted effort to organize atheists, especially men. How can progressive atheists and humanists fight this very disturbing trend? 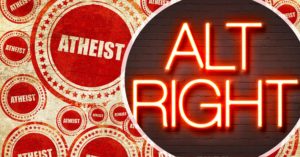 Images from Adobe, used with permission

About the speaker: Donna Minkowitz is a writer and journalist. A former columnist for the Village Voice, she has also written for the New York Times Book Review, Salon, and New York magazine. Since 2017, she has researched and reported on the white nationalist movement extensively for The Nation, Slate, and Political Research Associates.

Our Ethics Matters theme for April is wholeness; the practice of repairing what is broken or wounded, and knowing we are enough.

Our Sunday platform meetings begin at 11 am and end at about 12:30, with time for socializing afterward.  Feel free to bring some snacks to share.  Check the calendar for other Sunday events on most Sundays, 9 a.m. and 10 a.m.

Check the calendar for other opportunities for growth and community most Sundays at 9 and 10 a.m.