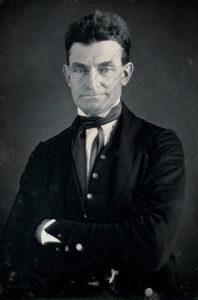 Americans, perhaps more than other nationals, want to believe the best about their country.  The prevailing historical norms generally point to people who stand with little ambiguity relative to the “big picture” of what is America and what is espoused as its founding principles.  It is a rosy and romantic stroll down history’s lane ignoring anything that interferes with that idyll.  Contemporarily and in retrospect, a review of John Brown strikes at the heart of that romantic picture.  Our attention is directed to the oft-ignored undertow which gave the plantations their magnolia fragrance, their courtly life with their extravagant balls.  Clearly, this life allowed some groups to become embedded local elites, their representatives flagrantly exercising their will fostering supportive national policies and steering the economic direction of the country to serve their ultimate interests.  The obvious crux of the matter was African slavery.   John Brown vowed to destroy it and the hope, of course, is that others would rally to the cause.  In anticipation, John Brown moved towards the inevitable showdown, first in Kansas and then at Harper’s Ferry.  Then it was over with his execution, but was it?  Eleven months later, the election of Abraham Lincoln sent the South to paroxysms and by March, the states that had been united had become undone.